For many years Ethanol and sugar were the main products of the sugarcane industry. The bagasse from the mill became a problem for plants because it did not have a proper disposal. With an entrepreneurial vision, Jalles Machado saw new possibilities and today the sugarcane biomass provides environmental and economic benefits for the company.

The beginning of this process was in 2000 with the installation of a thermoelectric power plant and Jalles Machado became a pioneer in Goiás in energy cogeneration from sugarcane bagasse. Besides supplying power to the mill own consumption, the production surplus is marketed, generating extra income to the company.

In recent years, with the national energy crisis, energy cogeneration from sugarcane biomass gained notoriety and became a great alternative, besides being a clean and renewable energy. The cogeneration capacity at Jalles Machado is 40 MW and at the Otavio Lage Unit is 48 MW, enough to supply a city of about 300,000 inhabitants.

In the 2015/16 crop, we were one of the first companies in Goiás to start the project of collecting sugarcane straw to increase electricity cogeneration at Otavio Lage Unit. This way, the straw from the mechanical harvesting is also added to the bagasse, enabling the production of electricity for a longer period, even in the off season. This project is developed by the French company Albioma, which holds 65% of Codora Energy, whose expertise is in high performance energy cogeneration from sugarcane biomass.

In the future, we plan to increase the production of electricity. In partnership with the Government of Goiás, the Union of Ethanol Manufacturing Industries, the University of Brasilia and a Spanish technology company, we carry out feasibility studies for solar energy generation. The intention is to use sunlight to generate steam and use generators and other equipment in the existing thermal power plant, forming a hybrid process for producing biomass-solar energy.

·         Contributes to the supply of electricity, especially in the dry season, when reservoirs are low.

·         Environmental gains by being a clean and renewable energy.

·         Emits a relatively low amount of CO2 in the atmosphere compared to a conventional generation system. This enables the plant to participate in programs to reduce the emission of greenhouse gases, such as Carbon Credits.

·         The bagasse from the sugarcane milling is sent to the boiler.

·         The bagasse is burned in the boiler for steam generation.

·         The high pressure steam is sent to the turbines of power generators.

·         The generated energy is consumed in the plant itself and the surplus is sold and supplies the community.

Cogeneration process with addition of straw to bagasse

·         The straw is windrowed four days after the sugarcane harvest;

·         The straw is added to the bagasse that will supply the boiler for steam generation;

·         The high pressure steam moves the turbines of power generators. 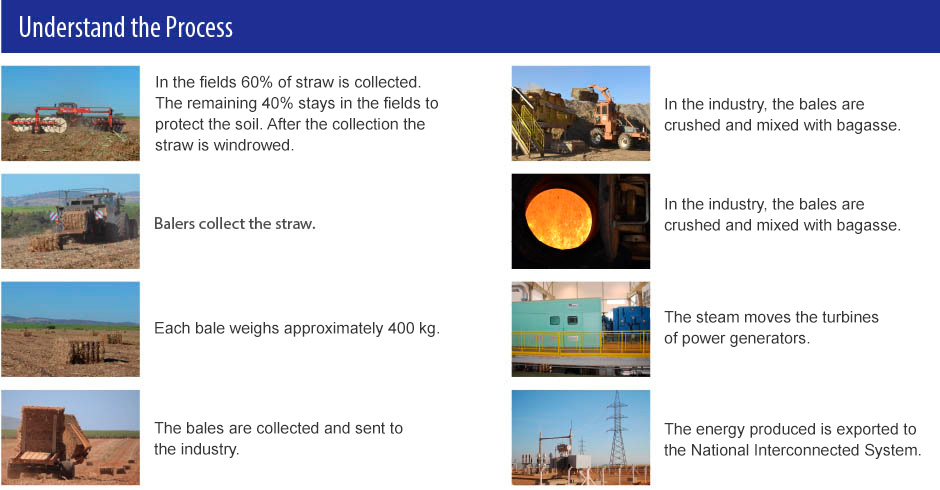